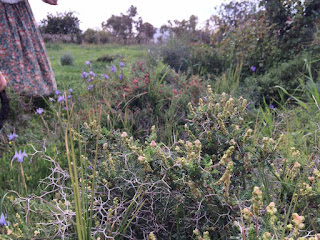 We are back from Cyprus where the boys and I had a great time hanging out with my sister and their cousin (and my parents!) and not having the distractions of laundry, cleaning or cooking.

As soon as I got back I was raring to go with making natural pasta beads for Tiny Land. 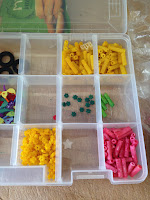 My youngest loves pouring, threading and fine motor skills play in general, so we made some teal, red and green stars and animal beads. I sell these on my Facebook page
www.facebook.com/tinylandplaystuffs

We have also continued improving the garden.  I had decided to replace the shed with some raised vegetable beds, but replacing the shed is such a big project as it's on a high piece of land, that I decided to use half the double drive. 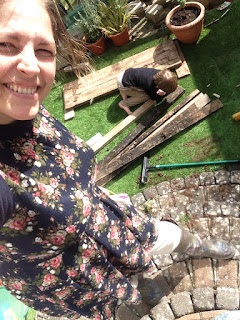 Thing is..it would cost me around £850 to have beds and soil put in, so I've started building my own!  Mad I know..as I have no childcare options other than preschool for my eldest but they are getting easier at having around and playing while I do stuff like the housework.  I like to get them involved when I can and Fin helped me build.

I had some lovely food in Cyprus including herbed boiled onions which don't sound very nice at all but were amazing! 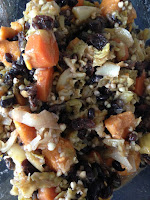 My mum told me they were done like my grandma made onions when she had a hotdog stand!!  I had no idea about this, it's always nice to hear something new about a loved one who has passed on. The other amazing thing was a pumpkin pie!  It tasted as though they had used raisinsand buckwheat.  I made a pie today with similar ingredients and love it! So here is the recipe.  Sorry for not providing exact measurements, wasn't thinking about sharing it at the time but it's TOOOO good not to! It literally gives you ALL your vitamins and minerals except b12 and D..but you can add marmite. 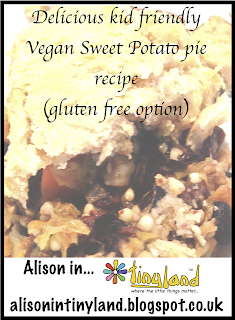 2 large leeks sliced
5 small carrots sliced
4 or so sweet potatoes sliced and halved (you can also use pumpkin or butternut squash)
Half a savoy cabbage shredded (place the other half shredded in the freezer for a quick veg option).
I placed the veg in a large pot in the following order..sweet potato, carrots, leek and cabbage.
I filled it with hot water up to the top of the leeks with a table spoon of salt and simmered for 15 mins or so until the veg was cooked through but not too soft (al dente).  I then drained any excess water (KEEP THIS WATER FOR STOCK OR FOR LATER IN THE RECIPE) added about
1 cup of buckwheat
A full tin of drained black beans
1 cup of raisins
2 tablespoons Vegan Worcester Sauce
2 tablespoons Soy sauce
(you can also add marmite for b12)
A ton of ground cinnamon..about 6 tablespoons?  My son loved doing that bit!  You can add dried apricots or sub the raisins with them...they will give you extra calcium - great for vegans.

If the mixture is too dry (you will be baking it again) then use some of the water from the veg to wet it.  Place the veg in a dish and make this lovely vegan pastry from Vegan Lovlie.  I always keep the water from my tinned chickpeas but haven't as yet had a reason to use it.  So was very pleased to be using my aqua fabia today.  **You can sub the flour with rice flour for a Gluten free option**


It makes enough for about a 6" diameter pot, so I should have tripled this recipe! In the end I just used it to put a top on the veg.  We made a few holes (my son told me that's what I should do!) 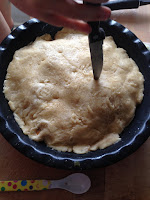 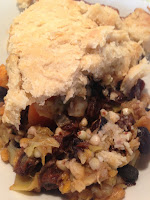 Finley loves crunchy food so this pastry was perfect for him.  Plus the sweetness of the raisins and cinnamon made it a winner with both toddlers!

Thankfully my husband watered my seedlings while I was away, and the Aubergines looked amazing!  The tomatoes weren't doing so well until I brought them in onto the window sill from the mini greenhouse. 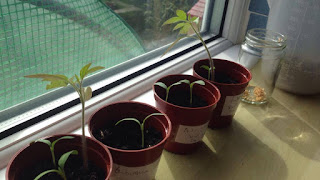 I have also been trying to learn how to play Bruce Hornsby and the range The Way It Is.  I always give up because I don't normally enjoy pushing through challenges that take time..and I find piano really tough.

Spiritually, I've been feeling super connected to the earth, universe and have had some real serendipitous moments.  I've started studying "A Course in Miracles" and the only teacher I found in West Sussex happened to not only live around the corner from me, but is connected to my sanctuary space - a cafe in Sharpethorne - where I read and drink coffee.  What do I read?
A Course In Miracles!

Also I can now translate my youngest - Noah's - words, which he does in full sentences but at first it sounds like just blabber.  If you really listen, you can hear him saying "I want to get down" "I want to go with you" and the other day he said "Flower" and pointed at a picture of  one.  So far he's only said "Mama, Dadda, there" one word blabbering but also he's been saying "I did it" for months.  He's 2 in May and I'm planning his In The Night Garden party already.  So proud of my boys!